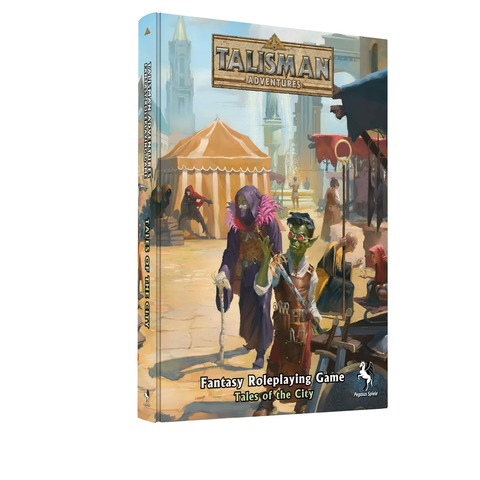 Bitte anmelden
Tighten your purse strings – and keep a watchful eye on the alleys and rooftops as you pass through the gates and become a part of Tales of the City!

From the Mystic’s Cabin in Villedoc, to the goblin town of Grelden, to the pious halls of the Temple in the City, you’ll discover previously unknown details of the civilized places of the Realm. Tread carefully and be wary of pickpockets, con artists and ne’er-do-wells who prey on the careless and inattentive.

This volume offers a trove of information to expand your Talisman Adventures Fantasy Roleplaying Game campaign, including the new goblin ancestry and three new classes (alchemist, gladiator, and tinkerer), expanded descriptions of the City and Villedoc and the towns described in the Core Rulebook, as well as completely new settlements. You’ll also discover new enemies, strangers, and followers, new gear and magic items. Finally, there is a City-based adventure for 3 to 6 players playing characters of 3rd to 5th level.